Today was a free topic for the BBBC so I thought I’d stick with my favorite thing to blog… cute stuff I found in SL.  It’s what got me into blogging in the first place and it’ll be the thing that keeps me blogging into the future. :D

There’s a really neat event going on right now called Etheria that is featuring some awesome jewelry designers as well as clothing designers.  I picked up some goodies from Lolapop! and Blue Blood and they are adorably cute.  If for no other reason, I highly suggest hopping by just to see the beautiful build.  Etheria runs until the 20th.

The topic for today’s BBBC post was: SL Bloggers – Is your avatar more or less your current biological age? Do you portray a younger avatar, or older? Why is this?

I can’t say I’ve ever given much thought to what age my avatar was.  I tend to style her in a fantasy way giving her a more mystical quality which I think makes her almost immortal to me.  I don’t think I set out to make a young looking avatar but unless I start drawing in crow’s feet and worry lines onto my skins my avatar will never look older.  In RL I’m 31 but I look much younger and feel much older. I still get carded whenever I try to buy booze! I had one guy give me the hardest time last year at a 21+ show, he thought I had a fake ID. I admit, it was totally flattering even though I felt a bit silly trying to convince him I was actually 30. I think I ended up being the oldest person at that show and considering how exhausted I was afterward, I certainly felt like the oldest person there. >.<  Anyhoo, onto the picture… my avatar styled up like RL me.

RL Bloggers – Would you start a relationship with someone you met online? Would you have a problem telling people that’s where you met? Do you think it’s easier to meet someone online rather than at work or at a club?

I’m married iRL so I can’t really speak on the SL topic about relationships… but I did meet my husband online about 11 years ago!  I was new to the city and to the university I was attending and thought hopping online might be a fast way to meet some friends. As it turned out my husband actually lived in my building so we actually ran into each other before we’d even meant to meet up in person.  I was hesitant to tell people how we met because meeting people online wasn’t exactly as mainstream then as it is today, and I waited until we’d been dating several months before letting the cat out of the bag to friends and family.  I’m sure some of them still think we just met on campus lol.  I think it’s much easier to meet online than in a social setting like a club or a bar.. especially for me because I’m terribly shy.  Getting up the nerve to approach a complete stranger just isn’t my cup of tea.. but online I never really had the same trepidation about chatting someone up.

On her:
Hair by Friday
Horns & Ears by Illusions
Shirt by Sprawl
Jeans by League
Flats by Sand Shack Surf Co.

On him:
Hair by KMadd
Shirt by Thimbles
Jeans by Gearshift
Shoes by Akeyo

Tree by Off Brand Furniture
Flowers by iTutu

I still feel like a truck hit me, backed up and then ran me over again…  So I’m going to post a pretty picture in lieu of really tackling today’s BBBC topic to discuss three positive things in SL. I like to think my little picture portrays the positive things about SL for me… it’s a place I can escape to, I can create my own little version of paradise because amazing creators make wonderful things I can fill my virtual world with and when I get the urge I can attempt to make some of my own pretties that, while they typically only appeal to me, are quite satisfying to see in world on my avatar.

I’d hoped to have more of a substantial post for the first day of Alicia Chenaux‘s Big Bad Blogger Challenge but I’m so horrifyingly sick that I’m not 100% I’m actually conscious right now.  But even so, I managed to drag myself to the computer yesterday to pick up Ploom’s Project Themeory hair which is so danged cute I couldn’t resist it.  I don’t know when Project Themeory wraps, but if it’s still out there, it’s a must have!

Hair by ploom (Project Themeory)
Eyes by House of Ruin
Ears by SLink
Necklace by Lolapop!
Dress by Dutch Touch

I finally have my beloved bubble chairs.. sorta.  I won them on my husband’s avatar because, seriously, F never effing comes up on that thing.  Perhaps it has been programmed out.  But at least K came up and it’s certainly better than not having them at all.  I have a thought on Lucky Chairs… for the love of all things F, please, please allow for wildcards.. even if it’s a very low chance for wildcards, at least that would be something.  Or if you don’t want to do that, put the item up for sale.  I swear, I would have bought those things 10x over if they had been for sale.  So there’s my plea.  Do it for the F’s.  ^^ 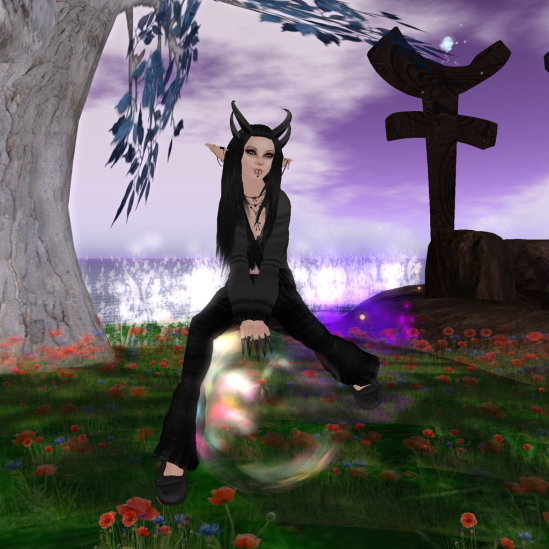 You’ve been given a sim of your very own to use for free for one year. However, there are 3 rules. It cannot be residential, it cannot be commercial, and it has to be open to the public. What do you do with it?

I’d love to make a sim inspired by the landscapes in World of Warcraft. I know, it’s geeky… but some of the places in WoW are just stunning and lovely and I’ve always wished there were areas like the Isle of Quel’Danas, Teldrassil and Crystalsong Forest to visit in Second Life.  It seems like post-apocalyptic, grungy and beach sims are a dime a dozen in SL and there really aren’t enough beatiful sims.  I’d love the sim to have lots of little vignettes, little photo op areas, little nooks and crannies to escape to and even if there were a lot of people there you could find a little spot to call your own for an evening.  I’d want it to be one of those places that everytime you visit it you find something new that makes you gasp.  This sim would also have an abundance of water areas, above and below the water because water looks so beautiful in SL and I’d love to see it used as more than an ocean off the coast of some boring old beach.  And even if you are totally unfamiliar with WoW you could still appreciate the beauty there. ^^

Describe what your perfect Second Life day would be like.

Most days in SL are pretty good for me really.  But the perfect day would definitely be one that was completely without responsibility.  No irate IMs to greet me, no vaguely titled notecards containing a demand to get something for free, no “urgent” stuff, just me logging in to have fun or work without having to worry about my virtual store being burnt to the ground by an angry mob.  Also on my list of wishes for this perfect day, I’d like to have all my uploads work, all my textures load quickly and properly, teleports work every single time, hair that fits perfectly right out of the box, my letter to *finally* come up on the Happy Mood lucky chair so I can get those bubble chairs I’ve been coveting and waiting and waiting for…. and I’ll take some cake too.  ^^

I do have a confession to make, once in a blue moon I’ll log into an alt I made a while back to just get away from it all… usually I’ll do this after something upsetting happened with a rude person or sometimes after a new release just to get a little peace and quiet.  Sometimes you just have to escape from your escape lol.

BBBC Final Question: What did you get out of this whole experience? Do you think this will change how you blog in the future?

I really had a good time with this challenge. While I wasn’t exactly slacking on posts prior to the challenge it was fun to try and post everyday… which I failed, but I was sick. :P The best part of the challenge for me was definitely discovering new people and their awesomesauce blogs! I love seeing all those new blogs in my reader! I also got a chance to admit my blog stalkerness to the world.

Will the challenge change the way I blog? That’s likely. I’m very quiet and super shy so I rarely throw myself into situations that require me to communicate with people so my blog has always been a way for me to throw some random thoughts into one semi cohesive mass to communicate for me and overcome my social awkwardness. And of course, I throw in pictures to really glue the whole mess together. I probably will post a little bit more often but the main difference in blogging will be a slight shift from the fashion-centric blog I had before. I enjoyed doing a few more “personalized” posts during the challenge. Sure, the outfits and pictures in previous posts are definitely personal to me because they reflect little aspects of myself in some way or another… but I’d like to do things that kinda light up my creative side more and maybe share a few little tidbits about myself in the process.

Keep in touch everyone! :D

Day 7: Blogger’s Choice. You pick something that’s important to you to talk about!

Well.. that’s a broad topic. :P Something that’s been on my mind lately.. thus making it important is the impending release of Wolf Parade’s new album. They are my most favorite band ever ever. I’m definitely a crazed fan girl when it comes to them. And since I was listening to some of the new tracks today I decided to make a Wolf Parade shirt for my avatar to wear in SL. Yus, I’m a geek.

So alongside the Wolf Parade tee I thought I’d lump some of my favorite things all into one picture. I have a thing for goggles and these new goggles I grabbed from ::69:: are my new favorites. I also <3 facial piercings. If you’ve seen my previous pictures, I’m rarely without them. So I saw that Electro Kitty had a new piercing available and it had so many options so I had to get it. I played around with them and kinda set up my favorite pairings together. I also love jeans and these are my favorite pair of jeans in SL, they are from League. And of course, my beloved chucks from Akeyo. This might be the closest I’m able to get my avatar to looking like my actual self… down to the hair actually which is that shade of pinky black right now. :D So now you know way too much about me. O.o

Hair by Truth
Goggles by ::69::
Piercings by Electro Kitty
Necklace from Curious Kitties
Tee by Me
Undershirt by BareRose
Cuffs by Atomic Kitty
Belt by First Flower
Jeans by League
Chucks by Akeyo

I know, I’m slacking on slurls >.< I’ll try to go back and fix them later. Promise!